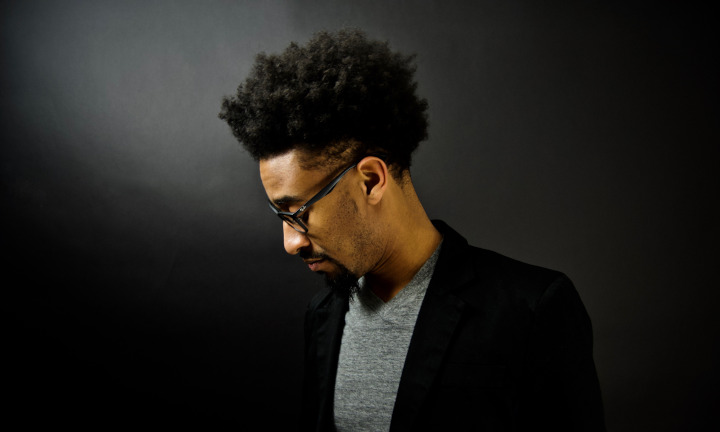 If your idea of a library is a place of hushed reverence, by all means stay away from the Downtown Branch of the Cleveland Public Library tomorrow afternoon where silence will be in short supply thanks to pianist Theron Brown and his trio of Jordan McBride on bass and drummer Zaire Darden. Reverence, on the other hand, will be abundant since these three players are among northeast Ohio’s most persuasive advocates of improvised music in the Black American tradition.

Maybe reverence isn’t the most accurate word, either. Brown has no problem making entertainment part of his concert experience. “When I’m playing, I’m entertaining myself sometimes and feeling entertained by my buddies playing with me,” he said by phone from his Akron home. “When I do library performances, I like to call it, like, edutainment. I open it up to the crowd a little bit more for conversation. So we might have some dialogue about the music or [answer] random questions, and we might want to demystify the music for them. It’s a place of education, the library, so we feel comfortable doing that.”

Listeners at Saturday’s concert will get a full survey of the piano trio tradition. Brown has the entire history of the piano under his fingers and is as comfortable with a head-nodding groove as he is with swing time. Still, his sparkling right-hand lines and inventive dialogue with jazz harmony make him a persuasive advocate of the mainstream–and an ideal ambassador for the music among younger listeners.

Brown’s is no stranger to educational settings of all kinds. He’s taught at every level from private instruction to the college-level and currently serves as artist coordinator for Akron’s I Promise School. But equally important to his musical personality is community. Growing up in Zanesville, Ohio, Brown played drums and organ at the Greater Apostolic Church of Christ where his father was pastor. He also picked up the viola in middle school and accompanied his father on preaching engagements while still a teenager. The notion of music as a community activity animates his creativity.

“When we play in church, it’s for something higher than us,” he said. “It’s something that is very selfless, and thankfully, I still carry that with me as I play, because I feel like this is a gift that I’ve been blessed with. Now that I have a platform, you can give those things back.”

Brown’s performance as a young Herbie Hancock in Don Cheadle’s 2016 Miles Davis biopic, Miles Ahead, marked the beginning of a new direction for a player who is typically ubiquitous on the regional scene. If it’s been a minute since you’ve heard Brown, it’s because he has just concluded a successful run as composer of the score for Dominique Morisseau’s play, Paradise Blue at Pittsburgh’s City Theatre. In addition to club dates in Pittsburgh, Brown has been active in the Midwest, playing in Iowa City, Chicago and at the storied club Cliff Bell’s in Detroit, where he recorded with trumpeter Curtis Taylor.

The trio that will play the library has been together for seven years. That’s a lifetime at a time when musicians tend to come together for short-term projects then go their separate ways, as seems to be the norm, especially in New York’s hyperspeed  scene. I asked Brown if extended musical collaborations were easier in a place like northeast Ohio. “Absolutely,” he said. “When I was younger, I would play in a lot of big bands with people like Sean Jones. He was once a young lion around here, and he saw the talent in the area and brought myself or Chris Coles or Johnny Cochran in and gave us that boost. So yeah, I think that if you see a young person, you want to get them going. Right now, with the scene of the people that are in my generation, we feel obligated to keep things going. We’re trying to put ourselves in positions to be able to lead and not let this thing die.”