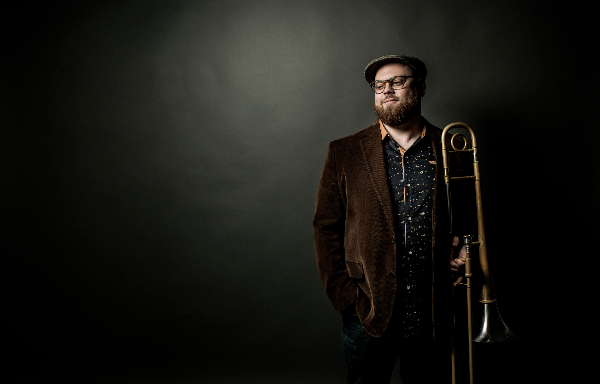 Though Sam Blakeslee has been increasingly active on the New York scene for five years, a part of him will always be most at home in Ohio. Want proof? Check out the credits on Busy Body, the new CD by his band Wistful Thinking, which will celebrated with a concert and release party at Bop Stop Saturday.

The core of the trombonist’s ensemble is the Cincinnati-based duo of guitarist Brandon Coleman and bassist Lee Wiles, and Akron’s Chris Coles on saxophones. The band is rounded out by New York up-and-comers Brian Krock on saxophones and Israeli-born drummer Dan Pugach with Cleveland all-timer Jamey Haddad making a guest appearance on percussion. 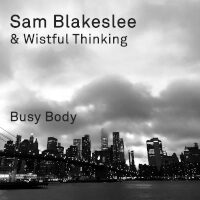 Along with Boston drummer Lee Fish, the three Ohioans are also in the band that Blakeslee is touring to support the album, proving perhaps that not only can you go home again, but you never really have to leave home to find great musicians.

“You know, there’s so many things that are undeniable about the New York sound,” Blakeslee said on a video call from his Brooklyn apartment last month. “In Ohio, I feel that people are more concerned with creating pure artistic statements [and] that creates a lot more artistic honesty. It’s more focused on community rather than individualism.”

For the Columbus-born Blakeslee, the sense of community was formed in his student days as an undergraduate at Youngstown State University, where he met bassist and educator Dave Morgan.

“He’s really the father of everyone that is doing things creatively, pushing things forward and releasing their projects,” Blakeslee said. Morgan, he said, “really created this incubator for us all to kind of explore and do different things. Me and Chris Coles, who were at Youngstown together, were just so grateful for the time there that we had with him.”

Morgan’s emphasis on individual creativity paid-off when Blakeslee arrived at the University of Akron’s graduate program. “It was a degree program in classical trombone, but I was the jazz graduate assistant, so my only responsibility was to write music for the ensemble.” Blakeslee called it, a sweet, sweet deal, and after I graduated from Akron, in 2013 is when I put my own big band together. Since then, it’s been about 10 years of trying to compose and write new music for different mediums.”

On Busy Body that meant bringing electronics onto the sonic stage. Initially, this was a case of necessity being the mother of invention. Much of the music on the CD was written during the early days of the pandemic when musicians couldn’t come together to play or rehearse.

Blakeslee taught himself Logic, a computer program for composition, because, he said, “I needed something to do.” Yet as he began to master this powerful new tool, the past was whispering in his ear.

“I realized that a lot of the kind of orchestration things that I was doing [in Logic] are still really rooted in a big band conception, but [by] applying synths to what the flutes would be playing, as opposed to what the tenor saxophone would be playing,” he said. “I was trying to create a sonic picture with each song, each being its own little universe.”

On “Busy Body,” Blakeslee said, “I wanted it to feel kind of frenetic, [like] people talking over each other and someone was always interjecting. But I also wanted it to feel warm. On ‘Crushed Life,’ I was trying to depict what an ice cave would look like, an extra-musical association. It was the reconciliation of styles of music that I had kind of put away.” 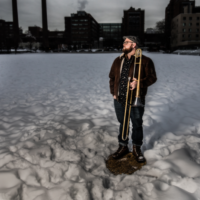 Those styles included the music of Jimi Hendrix and the Grateful Dead, early favorites. “Folks over the years kind of made me feel like that part of my influence wasn’t valid because it wasn’t coming from a certain lineage of the of the music. So [Busy Body] was my way of accidentally reconciling that.”

It’s also a way of reconciling Blakeslee’s dual identity as both New York freelance trombonist and northeast Ohio favorite son. It’s a balance that the trombonist is adept at holding, but this weekend’s return will inevitably tip the scales in a westerly direction, and the Bop Stop will play a big part.

“I don’t think there’s anywhere that I hold closer to my heart than that space,” Blakeslee said. “The first show I saw within a couple of weeks of being at Youngstown in 2007 was Dave Morgan, Russell Schmidt and Nathan Douds. “I had never heard anything like that, and I just kind of was blown away, not only at the music, but that there was a space like that, which didn’t really exist in Columbus. That was one of the first places I had the big band at. All these milestones in my career or my ensembles, they’re all attached to the Bop Stop in some way.”

And to the musicians with whom he played, at the Hingetown club and throughout the area. “I look back at the things that that I was able to create with my friends in Northeast Ohio before I moved and what they’ve done since then, and it’s all about the community. So I really  yearn for that team spirit, for lack of a better word, of Ohio, and I think that really transfers into the music too.”

Sam Blakeslee & Wistful Thinking, Saturday, Nov. 5, 8 p.m., at Bop Stop, 2920 Detroit Ave., Cleveland. $20 available here. $20. The concert will be livestreamed at Bop Stop’s Facebook page. Viewing the stream is free but donations to the band and the venue are appreciated and can be made here.

Piano Cleveland is the organization behind the Cleveland International Piano Competition. Yet the organization’s advocacy for the instrument doesn’t stop at the apron of the concert-hall stage. Joe Leaman, Theron Brown, vocalist Helen Welch and trumpeter, Tommy Lehman will hold down the jazz and jazz-adjacent corners of the repertoire while Hechengzi Li will play the classics. Raise a glass to this innovative and entirely welcome effort to embrace the totality of the pianoverse.

Blowing in from Chicago, this lithe trio headed by bassist Policastro is also touring behind a new recording, Sounds Unheard 2012-2022. It’s a collection of music new, old and unreleased that features guitarist Dave Miller, a frequent collaborator of the incendiary alto saxophonist Greg Ward, and drummer Mikael Avery, whose kit of vintage, calfskin-head drums is as interesting to look at as it is to hear in Avery’s swingingly minimal conception.

No, this is not a misprint. MacArthur Grant recipient, Harvard University professor and perennial poll-winner Vijay Iyer is coming to Youngstown and it’s a can’t-miss event. Unfortunately, information on tickets–and just about everything else–is hard to come by on YSU’s labyrinthine website. A phone call to 330-941-3636 might save you time and frustration.

The flood of releases by local players and bands is something to celebrate, and that’s just was saxophonist Justin Tibbs intends to do at Akron’s Trailhead with a show that features keyboard player Andru Dennis, Jared Lees on bass, trumpeter Tommy Lehman, vocalist Rachel Osherow, Holbrook Riles III on drums and MC Floco Torres.