Reunion: Steve Swell and the Frode Gjerstad Trio from Norway Reconvene at Beachland

With its wide dynamic range, speech-like articulation and capacity for playing off-the-scale notes, the saxophone would seem to be the perfect instrument for creative improvised music (some people call it “free jazz” or “avant-garde jazz” or “fire music”). Fine, but anything the saxophone can do, the trombone can do better. So why don’t we hear more trombones in creative music—or in mainstream jazz, for that matter?

It’s a question that Steve Swell, the trombonist who will appear at the Beachland Ballroom Sunday with saxophonist Frode Gjerstad, Jon Rune Strøm on bass and drummer Paal Nilssen-Love, has pondered for a long time.

“Trombones can be soft. It can be loud. It can be very, very rhythmic,” Swell said by phone from New York. “It makes perfect sense and is very suited for this kind of music.”

Swell, 67, has made “this kind of music” his entire career, playing and recording with such defining figures of creative music as Anthony Braxton, Bill Dixon and William Parker, with whom he can be heard to great effect on the bassist’s latest recording, Universal Tonality.

He was an important contributor to ensembles led by Cecil Taylor, Tim Berne (Caos Totale) and the late saxophonist Jemeel Moondoc, and has a leader discography of more than 30 releases. One of the most recent of those, Bop Stop, was recorded in Sept. 2017 at the titular Hingetown club with the same ensemble that will play the Beachland.

That concert, presented by New Ghosts, featured roaring torrents of impassioned blowing from the two horns atop waves of rhythm from Strøm and the extraordinary drummer Nilssen-Love, himself a frequent presence on the Cleveland scene. On a social post from the venue, I described it as Nordic, avant death Dixieland. It was music of surging, exultant energy set against moments of hushed, airborne subtlety. Approached with curiosity and an open mind, this is music of surprising beauty. It’s hard to understand why the trombone isn’t heard in this context more often.

Swell agrees. “Honestly, I really don’t understand it either, but I think it’s got something to do with the business and marketing and stuff–and the reputation that, somehow the trombone is a jokey instrument in some ways,” he said. “OK, fine, I understand that. It’s hard to fight back on that, but in a sense, it makes me work a little bit harder, maybe?” 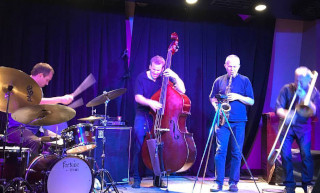 No, definitely. On the bandstand, Swell is all in, leaning, feinting, swaying and usually sweating. Like the music he plays, he is in constant motion, as this, the best photograph I took of the 2017 Bop Stop performance, proves.

The energy and commitment Swell brings to the bandstand makes him in-demand on both sides of the Atlantic. So does his musical openness. “I’m just drawn to different approaches to improvisation and I’ll try to make myself available,” he said. “It’s the old school thing. When I was younger, I went to every gig. I would try to do all different kinds of gigs–even out of the improvising scene, I’m talking about weddings, salsa gigs, and all of it. You make yourself available and you make yourself a reputation. For me, there’s a commitment involved, too. There’s a certain amount of work and listening and doing that get you to a level where it’s not only respectable, but you want to do it in a way that makes you shine and stand out.”