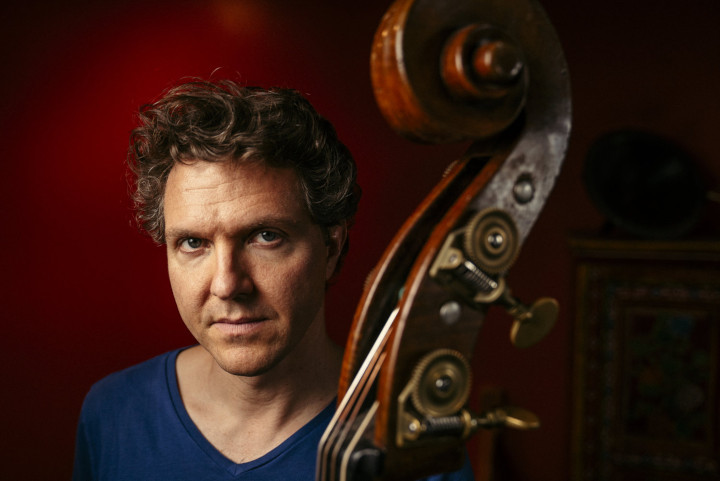 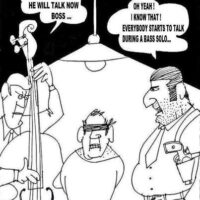 It’s practically a cliche in jazz circles: no one wants to listen to a bass solo. Stephan Crump has heard it all before. Yet when he kicks off his set at Bop Stop next Thursday, Oct. 13 at a concert presented by New Ghosts, it will be alone on the Hingetown club’s stage with only his double bass joining him. Don’t expect to hear a lot of sotto voce chattering. The more common response to Crump’s playing is stunned silence.

Crump is a master technician, but he is more likely to impress with the depth and emotionality of his music making. In his hands, the hulking instrument is a vehicle for the most delicate intimacy as well as bounding rhythmic drive.

He’s no stranger to the Bop Stop stage, having appeared six times since 2015, twice each with Secret Keeper, a duo with guitarist Mary Halvorson, and with his own Rosetta Trio with guitarists Liberty Ellman and Jamie Fox; and once each with his Rhombal Quartet and a cooperative trio with saxophonist Ingrid Laubrock and pianist Cory Smythe.

But a solo bass tour, such as the 10-day, six-city circuit that begins at Bop Stop, presents its own challenges.

“It’s a difficult thing to do kind of on every level,” Crump said by phone last week. Because of that, I’m old enough to have learned over and over again that pointing yourself toward fear and difficulty is putting yourself in the direction of growth.”

Crump has done a handful of solo concerts over the last few years, but the isolation of the pandemic made solo playing both a necessity and a springboard for exploration.

“I have a home studio and I love the recording arts,” he said. “I broadcast some solo concerts on Facebook Live and I recorded all of those and also started a fan-funded program on my Bandcamp page.” The process began in January 2020 and by the following month the page was ready to go. “My goal was to create at least two pieces per month,  an original piece and some kind of a cover or standard, and publish them on the page. When the pandemic hit and I was stuck at home, it was a perfect time to do this and I had probably two albums worth of material at the end of the year.”

So it was a productive time for Crump.  “I feel like I discovered a lot and learned a lot and grown a lot, as a human and as a musician, but at the same time,  the pandemic was not a writer’s retreat.” Crump and his wife, the vocalist Jen Chapin, have two teenage boys and the loss of income as a touring musician was keenly felt, then and now.

“I’ve had a lot of tours with groups that I’m a part of canceled in the last year and things are still  on shaky ground,” he admitted. “I’m not ready to fully invest in both the energy  and putting finances on the line to bring any of my larger ensembles out on the road.” On the other hand, a solo bass tour was, in Crump’s analysis, “much more limber as far as logistics go.” A solo tour also gave him the option to combine performance with teaching, which, he said, “is a big part of my mission, and something that I’m really good at. So I’ve been doing a combination of master classes and solo concerts.” One of them was at Oberlin in February.

Still, the notion of solo bass, on stage or on a recording, still presents a challenge. “I wanted the album itself to be really concise and take people on a on a journey,” Crump said of Rocket Love (Papillon Sounds), which was drawn from his pandemic solo sessions. “I think it does and there’s been really good response to it. Showing up to a solo bass concert is not an obvious thing to latch on to even for people who might be enthusiastic about hearing me and various ensembles that I’m part of. I’m trying to give a complete musical experience to people, just as they might expect if they went to hear solo piano concert, which most people wouldn’t blink at as a concept. It just happens that I’m playing a bass, but it’s not about the bass or how well this guy can plays an instrument. That’s not what music is about to me. I wouldn’t do it if I weren’t both exploring the possibilities and trying to transcend the instrument and, and open up a portal to create an experience for all of us.”