2×2: Scott Robinson Descends on Akron for a Pair of Duets

Scott Robinson, who will appear Thursday and Saturday at Blu JAZZ+ in Akron, is the kind of artist who defies easy categorization—or any categorization at all. Still, if you want to get a handle on the man, the opening 105 seconds of his 2017 recording, Tenormore reveal a lot.

It starts with four notes played with superb control in the outer reaches of the tenor saxophone’s range. They turn out to be the opening riff from the Beatles’ ballad “And I Love Her.” How many jazz players cover this tune? So, add big ears to great technique. Then, at 1:38, Robinson takes a sharp left turn from the melody with a skronky outburst straight from a Sun Ra Arkestra freakout. That’s something you don’t hear on the tradition-minded Arbors label, but Scott Robinson can–and will–play anything and everything.

Braithwaite & Katz · And I Love Her – Scott Robinson

It’s a cliché to say that a musician has played with everyone, but the range of Robinson’s experience is startling: Ruby Braff and Louie Bellson and Anthony Braxton, Illinois Jacquet and Joe Lovano, Ella Fitzgerald and Roscoe Mitchell. Robinson’s highest profile association might be his three-decadelong tenure in the Maria Schneider Jazz Orchestra. “Everybody loves her,” he said of the boss. “And with good reason.”

There are good reasons to love Robinson’s playing, too. One of them is versatility. Tenor saxophone is his primary vehicle, but he’s played and recorded on a dizzying array of instruments, from the gargantuan bass saxophone to a tiny, 19th-century flute that he played in duet with drummer Pheeroan akLaff earlier this month. “It’s a little Haynes wooden flute from the 1800s, maybe two-thirds the size of ordinary concert flute with just one little key at the bottom,” Robinson said by phone from his Teaneck, New Jersey home. “I got it at a flea market, did some work on it, and it’s in really good shape.”

That work was done in what Robinson called “the laboratory.” Some of the hundreds of instruments that Robinson owns (he’s lost count) have passed through the laboratory, the name of which reflects his longstanding love of science and science fiction. His record label, ScienSonic Laboratories, is a home for, among other projects, Robinson’s Doctette, inspired by pulp adventure hero Doc Savage, and for Heliosonic Toneways, a multi-generational tribute to the music of Sun Ra that included Marshall Allen, the now 97-year-old captain of the starship.

Yet, Robinson is equally at ease caressing a ballad such as “The Good Life” with old-school patience and suavity as he does with his 1924 Conn tenor saxophone on “Tenormore.”

Both sides of Robinson will be on display at Blue Jazz+, and one would expect Saturday’s encounter with dapper mainstream pianist Rossano Sportiello to have a strict setlist of familiar tunes while Thursday’s encounter with Cleveland saxophone explorer Howie Smith should be a freewheeling affair. 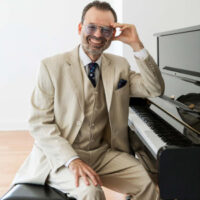 “It’s likely to be the other way around, actually,” Robinson said. For the night with Smith, he said, “We have a book of things that we’ve done in the past and one or two Sun Ra things that I’ve transcribed that we like to play and that people enjoy.” With Sportiello, Robinson said, “We’ll probably go up there armed with a mental grab bag of tunes, and then wing it from there.”

Winging it has a special significance for Robinson whose father was a Navy pilot and whose interest in aviation makes a visit to Akron especially attractive. “I have an airship room in my house that’s devoted completely to airships [with] my collection of books and models and postcards and all kinds of things related to airships and lighter-than-air flight, including some actual relics,” Robinson said. One prized relic is a postcard that was mailed from the doomed German airship Hindenburg. “Akron, Ohio has been this kind of Mecca that I always knew I wanted to visit one day.”

Robinson, 63, fulfilled his wish several years ago and was excited to hear that Blu Jazz+ would give him a good reason to return. “When I heard that there was a jazz club now in Akron, I said, “I’ve got to play in this place.’” When the saxophonist was engaged to play a private party in Cleveland, the logistical part of the visit was set. Free to pick up other gigs while he was in the area, he scheduled two nights and invited his two colleagues to participate.

For Howie Smith, this represents an opportunity to collaborate with a musician whom he has known for decades. Smith was teaching at a summer jazz camp in Saskatchewan headed by Phil Wilson, who was Robinson’s teacher at Berklee College of Music. “It was the first time I had been out of the country,” Robinson recalls. Smith was one of the teachers and connected immediately with his young fellow instructor.

“There’s nobody like Scott, man,” Smith said by phone. Explaining their instant bond, he said, “I think it’s definitely the personality. We’re both a little off center. I shouldn’t say that, but it’s probably true.”

The two have played in a duet setting before, most recently in Cleveland with two engagements at Bop Stop. “One of those times, we had the first set planned where we were doing a bunch of tunes, and then the second set was entirely improvised,” Smith remembered. “And then the next time, we had tunes planned throughout the night. It was really open. How will be based on tunes and how much we’ll be just free playing, we’ll figure that out next Thursday night.”