I get a lot of music for my consideration, more than 360 new releases so far this year. Almost all of them are notable for something, and I’d like to give them their due. So every week, I’ll do quick hits on the releases of the preceding seven days. it’s a great writing exercise, and a lot of fun, too. 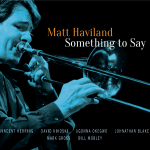 Think of “Something to Say“ as a map that leads the listener directly to trombonist Matt Haviland‘s musical heart. He gets you there pretty quick, exploding out of the blocks with Freddie Hubbard’s “Arietis,” the adrenalized hard-bop workout that led off Hubbard’s “Ready for Freddie.” That classic Blue Note session was recorded in 1961, and Johnathan Blake’s muscular, post-Tony Williams drum style excepted, there isn’t much on “Something To Say” that couldn’t have been recorded then, either. That’s not a criticism if hot-blooded solos, slashing heads and Jazz Messengers-style thunder is your thing, as it is mine. Pianist David Kikoski, who absorbed the style with bop master Roy Haynes, sparkles in a brawny rhythm section with bassist Ugonna Okegwo. Haviland came up the way the hard-boppers did, in big bands, and his arrangements have the punch and swagger of beefier ensembles. Like his fellow big band vets, he makes the most of his solo spots, like a furiously uptempo take on Joe Henderson’s “Inner Urge” and the Sinatrian balladry of “Get Out of Town.” The session’s MVP soloist vote, though, goes to Vincent Herring, who’s a firestarter every time he brings his alto to his lips. 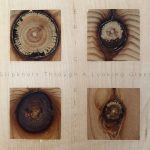 With “Slipknots Through A Looking Glass,” bassist Eric Revis has delivered one of the year’s most quietly devastating releases. It’s not like we couldn’t see this coming. In every way it’s an extension, maybe an elaboration, of a direction he’s documented on five probing releases for Portugal’s Clean Feed label. Gathering the saxophonists Darius Jones and Bill McHenry from 2014’s “In Memory of Things Yet Seen” and drummer Chad Taylor, also on that session as well as 2017’s “Sing Me Some Cry,” casts “Slipknots” as the latest installment in an ongoing project. Pianist Kris Davis, on whose Pyroclastic label “Slipknots” appears, also returns from “Sing Me” and was on two other Revis-led Clean Feeds. That’s a lineup with no shortage of soloistic firepower, and the saxophonists unleash it on the scouring, frankly ugly duel that blazes up on “Shutter.” But “Slipknot” is ultimately an ensemble record, one shot through with shimmering, sometimes phantasmagoric textures, many created by Davis’ liberal use of prepared piano. At times, Revis’ compositions recall Ronald Shannon Jackson’s 1980s Decoding Society in the slippery dreamlike way that unison horn lines wander in as if from another composition in a different rhythm (is it a coincidence that Ron St. Germain, who engineered for Jackson, was at the dials for “Slipknots?”). Like Jackson’s underappreciated bands and the Surrealist visual art he admires, Revis creates music that holds multiple realities in the same space, and it makes “Slipknots Through A Looking Glass” feel like a culmination. 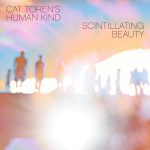 Vancouver-born pianist Cat Toren titled her new CD “Scintillating Beauty,” a quote from the Rev. Dr. Martin Luther King Jr.’s Letter from Birmingham City Jail. There’s beauty here in abundance, but it’s more shimmering than scintillating. Still, don’t let titles such as “Radiance in Veils,” “Rising Phoenix” and “Garment of Destiny” (the latter from another King quote) fool you, though. This isn’t a dreamy, New-Age session, nor a rehash of loopy spiritual-jazz ethereality. Sure, “Radiance” might begin in a “1001-Nights” cloud of oud (Yoshie Fruchter), chimes and piano arpeggios, but when Xavier Del Castillo‘s tenor saxophone shifts from whispered mantras to tumbling, hortatory expression, the breadth of Toren’s vision becomes apparent. “Garment” follows a similar trajectory that eventually veers toward freedom (though never collapsing into chaos), and “Phoenix,” with its big build toward a luminous, “sunrise” theme, recalls Coltrane at his most ecstatic. Toren and her supple New York band, which also includes bassist Jake Leckie and Matt Honor on drums, is on to something new here: call it spiritual jazz for the head as well as the heart.