I get a lot of music for my consideration, already more than 160 new releases in 2022. Almost all of them are notable for something, and I’d like to give them their due. So, when I’m not previewing live events in Northeast Ohio, I’ll offer hot takes on recent releases. Like these.

Anniversaries and theme celebrations generally make writers groan, but editors love them. At let’s call this, I wear both hats, and this week I’ll give my editor side the benefit of the doubt. Thus today’s Women’s History Month roundup of notable new releases by women. There’s more than a common editorial conceit behind the post; these four recordings are outstanding by any measure and make a strong case for the increasing and long overdue prominence of women who play, write for and lead bands at the forefront of improvised music in the Black American tradition. 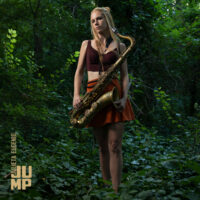 Looking at the cover photo for JUMP (Greenleaf Music), you might be forgiven for mistaking tenor saxophonist Julieta Eugenio for a teenager, but she is no kid.  Eugenio arrived in New York from her native Argentina nearly a decade ago, yet inexplicably this is her first release as a leader. It’s worth the wait.  In places, JUMP can recall Joe Henderson’s late-career efforts, especially the two “State of the Tenor” records that featured just bass and drums, here Matt Dwonszyk, and the lithe Jonathan Barber, respectively. Eugenio has a confidently searching tone and self-assured way of getting from note to note that can recall Joshua Redman, but her intuitive feeling for playing behind the beat caught me ear and marks her as an old soul. Who else would dig out “Crazy He Calls Me” and “Flamingo,” a pair of ancient tunes that nobody plays anymore? The latter, a heavily perfumed novelty even when it was introduced  crooned by Herb Jeffries’ plummy baritone with the Ellington Orchestra in 1940, could easily tip into parody. Eugenio zeroes in on the melody’s inner tango to find the beating heart of the old chestnut for an old-school reading of preternatural warmth. Too bad there’s no streaming link yet, because this you have to hear. 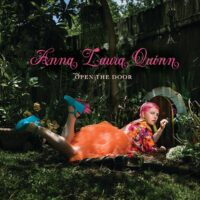 Anna Laura Quinn‘s voice is high and light, not what traditionalists might call a “jazz voice.” Her approach on Open the Door” (Outside in Music) is as breezy and fresh as her voice, blowing the dust off familiar tunes (“Love for Sale,” “Speak Low”) and thrift store finds like “Very Good Advice” and wrapping them in charmingly original arrangements. The charts might be the best thing about the record. On the a capella “Advice,” the New Orleanean overdubs her voice into a Mary Ford-like wordless chorus and  transforms a charming throwaway from Disney’s 1951, “Alice in Wonderland” into a coy anthem of fallen innocence, Amy Winehouse minus the melodrama. Quinn does something similar on Ellington’s “A Single Petal of A Rose,” stepping out of the spotlight to create an overdubbed Ellington saxophone section of vocalese to frame the Harry Carney-esque tenderness of Kate Campbell-Strauss’ baritone saxophone. Yet the cleverness of Quinn’s charts never call attention to themselves.  With a band that’s complimentarily easygoing, the nine-song 45-minute recording has the nothing-to-prove nonchalance of a demo session–or those classic mid-1930s sessions by Billie Holiday, to name another singer whose lack of a conventional “jazz voice” didn’t stop her. 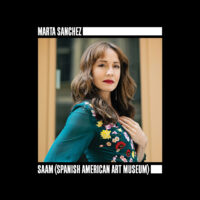 Think of SAAM (Spanish American Art Museum) (Whirlwind Records) as Marta Sanchez‘s quarantine-year “Pictures at an Exhibition,” a gallery tour of moods reflective, agitated and ambivalent. As a composer, Sanchez, a native Madrileña now resident in New York, likes to set interlocking cycles of often compound rhythms into motion for the twin saxophones of Alex LoRe (alto) and  Roman Filiú (tenor) to circle and occasionally bump into each other. She has a slippery, mutable harmonic sense reminiscent of Henry Threadgill, but where the Chicago master’s rhythms float, Sanchez’s, in the hands of bassist Rashaan Carter and drummer Allan Mednard, can bite.  Without keeping a tight hand on matters, and offering ample solo space, Sanchez nonetheless maintains a sense of order and balance in these nine compositions. Even on her most winding structural roads, Sanchez plants familiar signs in the form of recognizable heads and solo passages. You always know where she’s going, and the scenery is compelling. The prevailing mood of SAAM is pensive and the ballads tap deep wells of feeling within her deceptively rigorous structural frameworks. On “The Hard Balance,” Sanchez clears the compositional stage for poignant solos by Filiú and Carter over an elegant passacaglia. It’s music of grave dignity and heartbreakingly sublimated emotion, a Zurburan painting brought to life. 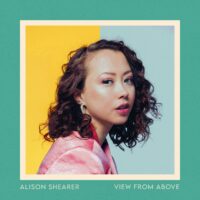 Genetics aren’t destiny, and in any case shouldn’t distract from the art at hand, but it’s worth noting that the callbacks to Black creators that alto saxophonist Alison Shearer makes on her self-released debut View from Above are more than gratuitous. Shearer is the granddaughter of Ted Shearer, the creator of the groundbreaking comic strip Quincy and the daughter of the photographer John Shearer. View honors this distinguished lineage with compositions such as “Big Kids,” which has an appropriately somber cello part (Susan Mandel), and “Toni’s Tune,” which incorporates a recording of the late Toni Morrison asserting that “Art is dangerous.” Yet the predominant mode here is bright and ingratiating in a West Coast Get Down way. Echoes of “Sunlight-” era Herbie Hancock abound with twinkly Rhodes and a bouncing groove, especially on “Celestial.” Add the airy vocals of Miranda Joan on “Breathe Again” and you have a perfect track for an Instagram lifestyle influencer’s Story. This is not a criticism. View from Above is vibe-y in the extreme, but not insubstantial. Shearer’s compositions and arrangements are sneaky sophisticated and her additive meters breathe so naturally that you might not notice that you’re bobbing your head in five or seven.