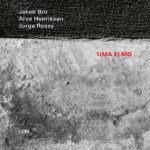 International surveys have identified Danes as among the world’s happiest people, but you’d never know it from Jakob Bro‘s spectral, haunted “Una Elmo” (ECM Records). Credit producer Manfred Eicher’s trademark acoustical framing, which is especially spacious, distant and lonely, highlighting the Danish guitarist’s icy atmospherics. It’s a self-effacing performance that’s hardly a performance at all; at times his presence is more felt than heard. That goes double for drummer Jorge Rossy whose assortment of mallets and brushes add expertly-timed booms and unsettling rustles. That leaves Arve Henriksen as a de-facto lead voice, singing these mostly sad songs in tone colors that range from a chalky, almost flute-like purity to a cry of quiet anguish. Bro spent time in bands led by Paul Motian and Tomasz Stanko, and both experiences figure in this music. The opening “Reconstructing A Dream” is a midnight walk through abandoned streets, the kind of grief-stricken landscape Motian described so eloquently. The latter is the dedicatee of a funereal composition where Henriksen whispers graveside confidences over gently picked harmonies. In “Music For Black Pigeons,” overdubbed trumpets blow a sad farewell salute to Lee Konitz over a tremolo loop from Bro that like this shimmering elusive music, slowly slips away. 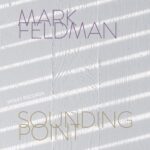 “Sounding Point” (Intakt Records), is Mark Feldman‘s first solo violin record in 26 years and well worth the wait, if only for the torrent of violinistic firepower that Feldman unleashes. But for all the dazzle of his technical displays, Feldman’s musical imagination is three steps ahead of his hands. The violinist has played everything from blues in his native Chicago to country music as a top Nashville session cat and the unclassifiable genre mashups of New York’s downtown scene. That’s a lot of material to draw on and he does so at a moment’s notice, often in a single selection. On his partner Sylvie Courvoisier’s “As We Were,” he’s a one-man band Carl Stallings animation soundtrack, jump cutting from high-stepping hoedown to slack-wire wobbles to wary questions that are swept away in a riptide of frenzied double stops. Ornette Coleman’s “Peace Warriors” has everything from country fiddling, a machine running down, vocalized sad-trombone moans and an overdubbed chorus of violins in Transylvanian close harmony. It’s so audacious that you want to leap up and shout encore. Let’s just hope we won’t have to wait another 26 years for one. 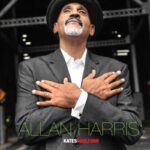 Quarantine inspired wanderlust might be fine for some, but not for Allan Harris whose Kate’s Soulfood (Love Productions Records) is a valentine to his beloved Harlem. It’s also a love letter to an era when crack New York studio bands lent a smooth professionalism to sessions for singers of R&B and jazz. Harris, with his slightly dusty baritone, neatly falls into the space between those genres, one that has grown deeper over time the way a river cuts a canyon in rock. The records of that era’s golden age, whose boundaries were roughly 1970-85, often featured lush ballads, message songs, anthems of self-sufficiency and vignettes of everyday life. So does “Kate’s Soulfood,” which begins with Harris’ shoutout to his aunt’s landmark restaurant and ends with “Run Through America,” inspired by  the state-sanctioned murders of George Floyd, Breonna Taylor and Ahmaud Arbery. The Willie Mitchell-inspired horn arrangements lend some appealing Stax/Volt smoke to the soulful sauce. 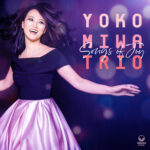 Written in the wake of the pandemic that prevented her from being present in Japan for the death of her father, it would be fair to expect Yoko Miwa to produce an elegiac album, notwithstanding the title “Songs of Joy” (Ubuntu Music). But Miwa is an extrovert, two-handed pianist who leans more toward thunderous, motoric declamation, McCoy Tyner style, than to lulling, Bill-Evans-inspired lyricism. True, she cites Evans as a major influence and dedicated “Inside A Dream,” a midtempo waltz to him, but the thick, rumbling left hand and rolling-thunder chordal melody of the opening “Freedom” evoke a joy of a more muscular sort: tough-minded and forward leaning. 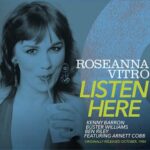 Once upon a time, singers were apt to be found in one of two places, the showroom and the lounge. The former was the large space where the energy and cover charge were high. The lounge, by contrast was a more intimate space and the music was too, typically barroom ballads and torch songs. Bands, often big ones, worked the showrooms while the quiet pianists haunted the lounges. That scene was fast disappearing in 1984 when Roseanna Vitro released her debut recording “Listen Here,” just re-released on Skyline Recordings, but in many ways it’s emblematic of the time. Vitro’s big, accurate voice and confident manner belong to the showroom. The silken accompaniment of pianist Kenny Barron, Buster Williams on bass and drummer Ben Riley (the core of the band Sphere), would be at home in the higher-echelon lounges, and certainly in jazz clubs. By contract, the setlist is mostly showroom:  songbook standards, sly blues and a dreamy samba or two. Vitro really sells the songs in a way that you don’t hear much anymore. Thankfully, you also don’t hear the walloping, echoing vocal acoustic or the gluey bass tone that was an unfortunate commonplace in recordings of that era, this one included.