Yesterday I wrote about the gusher of big band recordings that have been an unlikely feast in this summer of musical famine. Now to the tastiest of them, which is also perhaps the most substantial. 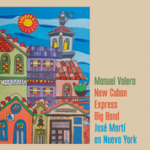 Manuel Valera‘s “José Martí En Nueva York” was released last Friday and would have been included in last week’s roundup but for one inescapable fact: it is so packed with beauty, so overwhelming a synasthetic experience that I couldn’t bring myself to analyze it. I just wanted to bathe in its extravagant gorgeousness. Masterpiece is not too strong a description for this mesmerizing, deeply-felt music.

Valera, who was born in Havana, is heir to a Cuban aesthetic tradition of passionate maximalism. One of the founding fathers of that tradition was the poet and patriot José Martí, whose “Versos Sencillos” (Simple Verses) provided both text and subtext for this big band project. Many of the nine poems set here were written when Martí was exiled from Cuba–in the Catskills, of all places—for revolutionary activities against the Spanish colonial government. The sense of longing for his beautiful homeland is achingly evoked in every verse, but the opening “Odio La Mascara Y El Vicio,” establishes the mood with instant magic. Over a melody beautifully written for woodwinds evoking slow, tropical rivers sails Camila Meza‘s clear, pure voice, a perfect embodiment both of the Edenic landscape and the longing for it. She’s almost unbearably, heartbreakingly sincere. Meza returns on “Por Tus Ojos Encendidos,” a romantic bolero where a lover’s jealousy melts into pathos. Argentine-born Sofia Rei‘s instrument is darker and weightier than Meza’s and thus perfect for the Goya-esque drama of the next two compositions. “Yo quiero salir del mundo” (I want to leave the world Through the natural door/Don’t put me in the dark to die a traitor) casts Marti’s defiance in a driving seven-beat rhythm with slashing call-and-response section work. “El enemigo brutal” (The brutal enemy) is a bloody recounting of Habañero defiance in the face of a Spanish slaughter. After a darkly brooding electric bass solo over a 6/8 clavé a skirling soprano solo by Charles Pillow captures the flashing sabers of the poem. An anguished Alex Goodman guitar solo laments over barking trombones and Valera plays otherworldly piano arpeggios as Rei reverently recounts the bravery of the Habañeras. It’s thrilling stuff, and following it with the pacific “Cultivo Una Rosa Blanca,” in which Marti offers a white rose to his antagonists, is a real coup de theatre. The poem, arguably the best-known of the “Versos” gets a passionate reading from Rei and is followed by a breathtaking ensemble chorus of reeds in unison with guitar. The CD ends on “Si Quiere Que De Este Mundo,” driving New York Latin jazz culminating in a full-band ensemble riff that is straight out of the Thad Jones/Mel Lewis playbook. It’s a stand-up-and-cheer moment.

Valera’s setting of Martí’s poetry is sensitive and evocative throughout. The arrangements are dazzlingly colorful and the climaxes, where the band rides the tidal-wave power of rolling rhythms and section-work momentum, are overwhelming; Valera’s command of tension and release is sovereign. Those qualities alone would make this an outstanding release. What lifts it into the extraordinary is the blazing commitment of the musicians who sing and play here as though their very lives depended on it. In his notes, Valera says he wrote this music as therapy after the death of his wife, and it’s not hard to hear in the poetry of the exiled Martí the pain and longing of Valera’s exiled heart. The real subject of “José Martí En Nueva York” is love, a love so voluminous and all-embracing that only music can adequately express it.