Johnny Hodges is widely acknowledged as perhaps the preeminent alto saxophone player in the decades before Charlie Parker’s emergence. Yet unlike Parker, whose influence on saxophonists is apparent 68 years after his death, Hodges’ style is almost universally celebrated in print and online yet never heard on the bandstand.

Until now. Saxophonist Owen Broder is putting Hodges where he rightfully belongs: front and center with an ambitious recording project and a new band that swoops into BLU Jazz+ on Friday.

Broder who will celebrate his 33rd birthday next week, was born nearly 30 years after Hodges’ premature death at 63 in 1970. Yet the anchor of the Duke Ellington Orchestra’s saxophone section has been central to Broder’s musical development almost since he first picked up a saxophone.

“Since my formative years, [Hodges] has been a huge influence on my playing, starting out in high school at the Douglas Anderson School of the Arts in Jacksonville, Florida,” Broder said on a video call. “We participated, and in fact ended up winning the Essentially Ellington competition, which is where I really first got to dig into Johnny Hodges.”

Broder played lead alto saxophone in the school’s big band, the same chair that Hodges occupied in the Duke Ellington Orchestra for 40 years. “A few years later, I was introduced to the fairly well-known small group records he did with Ellington, ‘Back to Back’ and ‘Side by Side,'” Broder said. Those albums, he said, “reframed Hodges as a soloist and a small group player in a way that I hadn’t been familiar with before. And I continued for many, many years to be really inspired by his melodic approach and the way that he improvises with this lyrical quality that the Bebop era kind of got away from. Now with this album  I’m releasing, I’m shifting the focus to Hodges, putting him front and center.” 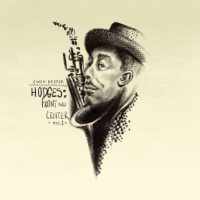 While Broder’s intention on Hodges: Front and Center, Vol. 1  (Outside In Music, released October 14) was to celebrate Hodges, he does not try to imitate him. In any case, that would be nearly impossible to do without it coming off as parody. Hodges’ grand, sweeping glissandos and exquisitely poised ballad phrasing were so audaciously baroque that they come dangerously close to kitsch yet never cross the line. You wonder how he could get away with it until you realize that he has you in tears. The Rabbit, as he was nicknamed by his Ellington bandmates, was one of jazz’s great high-wire acrobats.

And that might be why no one chose to imitate him. No one would dare, though Broder once tried.

“As a student in that saxophone section in 2006, we were very much trying to capture the sound of everyone in [the Ellington] band and the band collectively,” Broder said. “So yeah, at that point, I was very much trying to sound like Hodges, to catch all of his subtle all of the subtleties of his sound and his inflection and articulation. But with this album, I  very intentionally did not want anyone in the band to feel like we’re trying to recreate something that’s been done. The goal was to highlight this music that has not gotten its due appreciation and highlight Hodges as a bandleader in his own right. Without trying to recreate what’s already been done, I wanted each of the players on my album to feel like they can play this music with authenticity but also with their own personalities.”

Mission accomplished. Yet the young players on Front and Center pay homage to their antecedents with subtlety and style. On open horn, Riley Mulherkar has the shining tone of a big band lead trumpet players such as Harry James. His rhythm section of bassist Barry Stephenson and Bryan Carter provide steady swing that never calls attention to itself while pianist Carmen Staaf, who seems to be on many of my favorite recordings of 2022, comps with the taste and finesse of Ellis Larkins and solos with the sly humor–and perfect taste–of Ellington himself.

Staaf and Stephenson will be in the band that will come to Akron this weekend, joined by trumpeter Nadje Noordhuis on trumpet and Dan Pugach on drums. The engagement at BLU Jazz+ marks a return for Broder who played the club in December 2018 with Cowboys & Frenchmen, a cooperative he co-leads with fellow saxophonist Ethan Helm and pianist Addison Frei.

Broder describes that band as “all original music and very contemporary leaning.” His American Roots Project also plays mostly original music and contemporary interpretations of  early American folk music.” Yet, Broder sees a connection between these three outwardly dissimilar projects. “I think there’s  a through line connecting heritage with a contemporary perspective on earlier traditions. With this Hodges project, I think this was my opportunity and my interest in creating a tribute, an homage to one of my early influences. And I’m enjoying doing it very much. ”

Northeast Ohio is four musical events in the coming week that you might want to check out.

If you’re reading this early enough on Tuesday, you still have time to go to the Go Factory to catch the double bill of Togishi (Mike Sopko, guitar; Joe Tomino, drums and saxophonist Dan Wenninger) and Trio Demuse (Alberto Martir, saxophone; Pete Dell, percussion and Jody Kamensky, bass) for an evening of exploration and good musical trouble.

Les frères Moutin might be the most formidable bass-and-drums brother act since Percy and Tootie Heath. Last seen in Cleveland with their Moutin Factory Quintet, bassist François and drummer Louis return with Montréal-born saxophonist Joweie Omicil for an evening of what promises to be high-energy music. Bass players won’t want to miss this chance to see François, a player of eye-popping virtuosity. Cleveland says, “Hi, M.O.M.!”

Look around the NEO scene and you’ll find graduates of Youngstown State’s Dana School of Music doing some of the region’s most interesting work. For a preview into whom you might be hearing from in the years to come, this free showcase is the jazz equivalent of baseball’s Futures Game.

Charity, the saying goes, begins at home. It’s a message that percussionist Jamey Haddad heeded when he returned to his hometown after decades on the road with such luminaries as Yo-Yo Ma, Paul Simon, and Sting. Since then he’s been a welcome presence on the local scene, not least for the friends he’s brought to town to share the love. On Saturday, he’ll be joined by Grammy-winning Israeli pianist Alon Yavnai and Cleveland’s Swiss Army knife bassist, Kip Reed.

For the most complete list of jazz and jazz-adjacent events in the area, Jim Szabo’s weekly Northeast Ohio jazz calendar is a must-read.