For years I’ve been jealous of accounts by new York music fans of buzzing from one venue to another, taking in multiple noteworthy performances in the same evening. It’s a little harder to do in flyover country, but not impossible, as Sunday proved.

First up was an afternoon performance by pianist Mara Rosenbloom’s Flyways in Mercyhurst University’s Walker Recital Hall. This band’s signature project has been a setting of the second of Adrienne Rich’s 21 Love Poems, and this 40-minute work comprised the band’s first set. A dreamy evocation of awakening to a lover, the poem is part of a cycle that limns the exertions of a relationship that is not supported by the community. 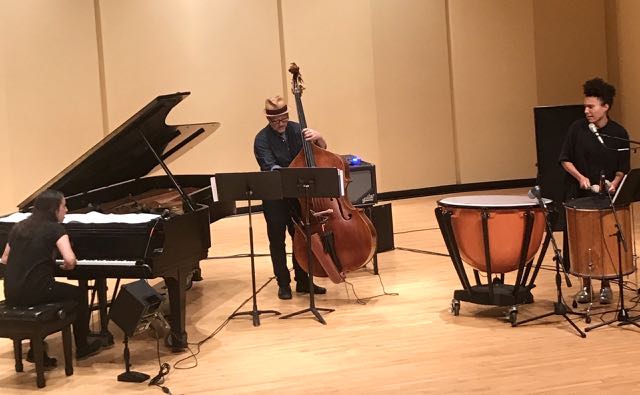 That struggle was not audible in the drowsy, pensive washes of Debussy-ian piano that opened the work, nor in vocalist Anaïs Maviel‘s pure, rapt soprano. Maviel unfurled ribbons of sound to open the work, but mallets on her muted drum brought a distant thunderstorm to the bedroom window of the two lovers. Gathering darkness swirled around Rosenbloom’s piano and gathered into a whirling, ostinato figure on the line “I’ve been writing for days.” Accompanied by taps on a singing bowl inverted on Maviel’s drum, the passage vividly described another sort of exertion: the agony of creation.

I’m hardly objective, but the alternating mania and doubt attending to the creative process, seemed to be the point of the poem, and it brought forth Rosenbloom’s most evocative music. The work, which has been recorded for imminent release by Fresh Sound/New Talent, alternated short paragraphs of written music that leapt into improvisation. Moods alternated, too, and as the poem’s thoughts returned to the lover, the clouds cleared and the music, commented on by Sean Conly‘s gentle and supportive bass commentary, dissolved into a reverie, with quiet humming by Maviel.

The final line, “To move openly is not simple,” might have been a statement of intent for Flyways’ music, which was almost shockingly open and intimate. Though the sound was far from jazz, the extraordinary level of communal listening and intuitive response brought the audience to the edge of the  lovers’ bed.

This is bravely uncompromising music, not the kind of stuff we get to hear in Erie, Pennsylvania. It’s also not the sort of mainstream fare that JazzErie usually presents. With perhaps 25 people in the audience, it’s not likely to be heard again, but if a service organization such as JazzErie won’t take this sort of chance, who will? To move openly is not simple. 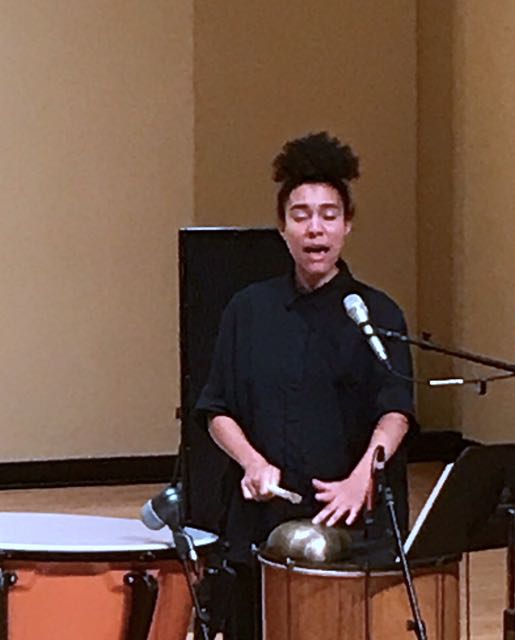 There was a second set, and it opened with what Rosenbloom described as a premiere of new music the band is working on.  It was a blues-soaked, ostinato-driven piece that blazed as much as the first set shimmered.  Again, the text was by Rich, the third poem from her “Origins and History of Consciousness.” Another interrogation of relationships, this time, a furtive one, the poem gave Maviel a chance to soar with improvisations in her highest register. Conly, subbing for Flyways’ regular bassist, Rahsaan Carter,  plucked strong, woody notes in the intensely rhythmic piece, while the leader’s piano turned out churning rhythmic figures alternating with rhapsodic interludes that invoked the way her teachers, Cooper-Moore and Connie Crothers are alternately rooted in the earth and dreamily evocative.

There was more, but I couldn’t stay to hear it.  I had another concert to make that night, and it was more than a subway ride away.