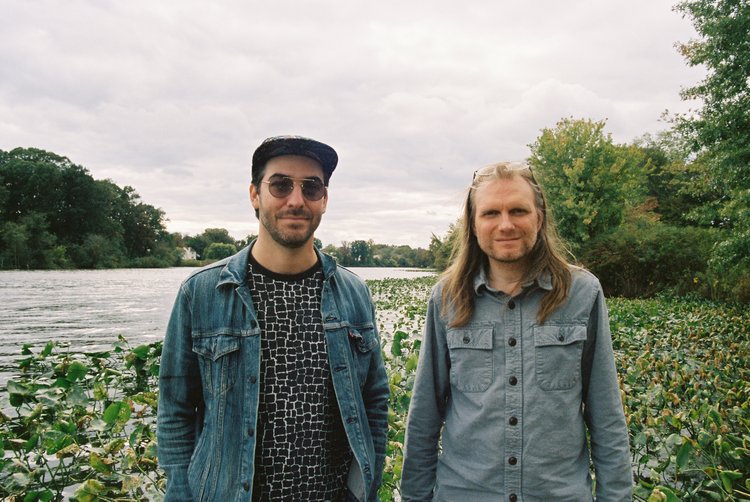 Philadelphian Nick Millevoi is best known for the post-industrial guitar grime of his Desertion Trio. Keyboard player Ron Stabinsky is one-third of the jazz arsonist squad Mostly Other People Do the Killing (MOPDtK), and every punk fan knows Derrick Bostrom as the founding drummer of the Meat Puppets. So it stands to reason that when the three come together as Grassy Sound Sept. 8 at Cleveland’s Bop Stop, they’ll be playing lounge music.

Don’t close the tab! Grassy Sound plays lounge music on an exalted level, the kind you’d hear in the Village Vanguard if that hallowed jazz shrine were a lounge, not the kind of lounge music you’d hear at a Howard Johnson’s motel in Reading, Pennsylvania in 1972. Actually, it is the kind of music you’d hear at a Howard Johnson’s in 1972, but that’s a feature, not a bug, says Millevoi who, for the record, was not yet born in 1972.

That last fact is crucial. “The reason that I love this kind of music is that, growing up in the ’80s, I spent a lot of time with my grandparents and some of this kind of music was being filtered through them,” Millevoi said by phone while walking through a Philadelphia-area park. “But it was also being filtered through ‘Pee Wee’s Playhouse,’ through the B-52s or the Stray Cats being on MTV and having constant access to culture on ‘Nick at Night’ and  then seeing the ads for box sets of songs from the ’50s. That’s the stuff that was  swirling around in my brain when I was six years old.”

That stuff is still there and coming soon to the four venues on the short tour in support of The Sounds of Grassy Sound (Destiny Records), the band’s debut album released in July. Swirling is an apt way to describe the sound emanating from Millevoi’s amp, a 1949 Fender Deluxe Tweed. “It has a has a three-digit serial number. So it’s a really early one,” Millevoi said, still with a sense of wonder. “Leo [Fender] probably had his hands on that one, which is really cool for me.”

Millevoi is the rare gear geek who doesn’t own dozens of guitars. He current count is nine, not counting two lap steel guitars. “I just don’t have enough space for 30 guitars,” he said while leaving open the possibility that should conditions change . . .

Like most musical unions, Grassy Sound was formed through mutual connections. “I knew who Ron was, but the first time we met in person was at a gig where we didn’t improvise together, but I  like I felt like we really connected and just wanted to immediately make a bunch of music with him,” Millevoi said. They recorded together on the Desertion Trio’s Twilight Time, a record of atmospheric covers (“Town Without Pity,” “Taboo” and Santo and Johnny’s “Sleepwalk”) that in many ways set the template for Grassy Sound.

All that makes sense. So where does Bostrom fit in?

Lately, Stabinsky, whose other credits include solo performances and membership in the Philadelphia new music ensemble Relâche, has been a member of the reconstituted Meat Puppets. When the Pups’ Cris Kirkwood contributed vocals to a demo of “Tumbling Tumbleweeds,” a song the Pups covered on their eponymously titled 1982 debut recording, Stabinsky called Millevoi to tell him that the drummer wanted to be on the record. “I don’t think I would have been forward enough to invite him on my own,” Millevoi said. “So I’m glad he found his way in. Even with this tour, I had been texting Derrick, but he wasn’t invited because he lives in Phoenix, and flying him east just wasn’t in the budget. But then he said, ‘If you’ll have me, I’d like to play this next group of shows.’ Oh, easy!”

From a presenter’s perspective, increasing the size of the band by 33 percent–and adding a marquee name at that–is seldom happy news, but New Ghosts guiding spirit Matt Laferty could hardly contain his delight. “As a person who came up in the ’80s, a punk-adjacent kind of person who heard the Meat Puppets, getting to host Derrick Bostrom is . . . well, my younger self would be pinching himself right now.”

Grassy Sound wsg Derrick Bostrom, September 8, 8 p.m., at Bop Stop, 2920 Detroit Ave., Cleveland. Presented by New Ghosts. $20 available here. The concert will be livestreamed at Bop Stop’s Facebook page. Viewing the stream is free but donations to the band and the venue are appreciated and can be made here.