For more than 20 years those concerts took place at the Erie Art Museum before moving to Millcreek’s Artlore Gallery in 2019. After a pandemic hiatus last year, Erie’s longest-running roadshow returns to downtown at a new venue, City Gallery, 1503 State Street.

Erie bassist and scenemaker Steve Trohoske, who runs City Gallery and Artlore along with his life partner Lena Logvina, discussed a resumption of the Ethnics’ traditional February tour stop in Erie after El’Zabar’s performance at last year’s Erie’s Blues and Jazz festival.

“Kahil said, in that way of his, ‘Hey, Daddio, we’re doing this thing,'” Trohoske remembered. “I was in no position to say yes, but I did, because it’s the Ethnics.

The Ethnics’ lineup has changed through the years with multiple generations of notable players coming through the band. Saxophonists Edward Wilkerson, Ernest Khabeer Dawkins and the late Hamiett Bluiett, trombone master Joseph Bowie and guitarist Fareed Haque have all taken the stage with the Ethnics. In an early show at the now vanished Art Museum Annex, the legendary Chicago percussionist and philosopher Harold Atu Murray made an appearance (look him up). But no matter who was in the band, the energy flow centered on El’Zabar. 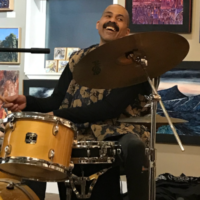 The tall, elegant Chicagoan is 68 now, but you’d swear he was two decades younger. His energy and magnetism haven’t dimmed with the years even as his music has increased in eloquence. As he has done for the past couple of Erie appearances, El’Zabar will surround himself with younger musicians.

Chicago’s Corey Wilkes is in the great tradition of Ethnics horn players who can convey loud emotion at the very softest volume levels. Detroit-born baritone saxophonist Alex Harding can be both a boisterous soloist and a surrogate bass player in the three-man formation.

El’Zabar is a past chairman of the Association for the Advancement of Creative Musicians (AACM), an enormously influential Chicago organization that upended conventions of playing and presenting music since its origins in the mid-60s and continues to influence musicians today.

Nicole Mitchell, the composer and flutist who holds the William S. Dietrich II Endowed Chair in Jazz Studies at the University of Pittsburgh is also a past chairman of the AACM. She said of her colleague, “The AACM has always encouraged its members to develop their own distinctive voice, and Kahil is a great example of that. With his Ethnic Heritage Ensemble, his Experimental Band, and is other groups, he’s inspired the spirit of the AACM and Chicago’s Black music lineage all over the globe: independent, innovative, and charismatic.

The Ethnics have billed this tour as Return of the Spirit, and it comes as advertised. “It’s magical,” Trohoske said of an Ethnic Heritage Ensemble concert. “Anyone that’s ever experienced one of their shows can tell you that it turns magical.” And spiritual, too.