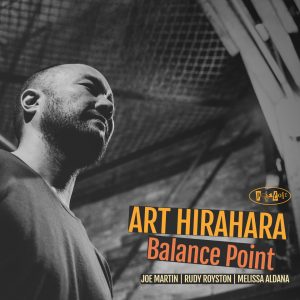 I’ve got to stop being surprised by Art Hirahara. Every other year since 2014, Posi-Tone Records has released a delightful CD by the Bay Area-born pianist. This year’s “Balance Point“ is the best yet.

Like a younger Kenny Barron, Hirahara is a pianist of freshness and clarity, a sparkling improvisor and a sensitive accompanist who never overplays. His compositions are smart and engaging and have the kind of juicy melodies that no one seems to want to write anymore. So, why on earth is this guy not on more recordings?

Hirahara’s virtues are summarized on the opening “Mother’s Song,” a touching mid-tempo waltz for solo piano. “Blessed Son, Mr. Weston,” a Caribbean-influenced tribute to the late piano patriarch, gets great lift from Posi-Tone’s apparent house drummer, Rudy Royston, who begins by playing with his hands and drives the piece home joyously when he switches to sticks. Tenor saxophonist Melissa Aldana makes her first appearance on the title cut, and she’s devastatingly good, singing the melody, doubled by Hirahara’s right hand, with exceptional grace. When Royston turns up the heat, Aldana digs in impressively. You don’t have to be a yoga practitioner to appreciate the poised, serene beauty of “Ascent” with its “Naima-” like tempo and feeling ending in a musical “namaste” from the pianist. Hirahara’s witty “G-Yokoso,” is a playfully off-center mid-stroll with some Coltrane and Charlie Rouse allusions from Aldana and a taste of stride piano from the leader. Feather-light and full of air, “Had It Happened,” based on “It Could Happen To You,” finds the leader in full Bud Powell mode, gleefully stringing necklaces of fast lines over bassist Joe Martin‘s irresistible bounce. “Like Water,” (the title is drawn from a Bruce Lee quote) is a bluesy waltz with a gently authoritative Aldana and a beautiful ascending, yearning bridge. Someone seriously needs to put lyrics to this. It’s a mark of Hirahara’s great taste that his favorite Ellington ballad is “Prelude To A Kiss.” Here he offers two lovely unaccompanied choruses, the first played relatively straight and with some arpeggiated Ellingtonian flourishes on the bridge. The high point of the session–no pun intended–is “The Path Of The Gods,” named for spectacular mountain trail on Italy’s Amalfi Coast. It’s a sweeping cinematic travelogue that could be the theme music for the screen adaptation of a high-toned literary novel. Lester Young counseled that solos should tell a story. Aldana’s yearning and dignified solo evokes a pilgrimage with poised intensity. Like Hirahara, she never shows off. “Balance Point” ends with “Homage,” a warmhearted waltz with a dancing bass solo by Martin and Royston at his most sensitive, and “Lament for the Fallen,” a stately, through-composed slow march for Aldana’s breathy tenor.

This isn’t the kind of record that shows up on yearend lists, but that’s a mistake. With brains and heart, taste and great chops Art Hirahara has found a balance point that feels like a breakthrough.