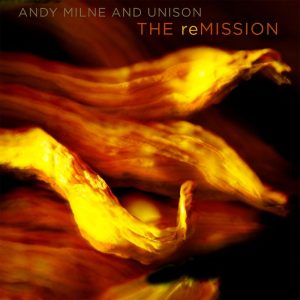 That’s appropriate given the gravity of many of these highly personal pieces. At times, they conjure the hovering mystery of Paul Motian’s trio work with Masabumi Kikuchi, Keith Jarrett, Geri Allen and Milne’s fellow Canadian, Paul Bley.

It’s not that Milne sounds like any of those pianists, exactly, though the asymmetrical rhythms of “Geewa” have their origins in the concepts of Steve Coleman in whose bands both Allen and Milne played. Jarrett’s explosions of rhapsodic lyricism have an echo in Milne’s rapturous treatment of Benny Golson’s “Sad to Say,” and Bley’s purposeful waywardness informs the hymnlike “Anything About Anything.” As for Kikuchi, well, nobody really played like him, but Milne’s haunting (and haunted) “The Call” approaches the koan-like compression of the late pianist’s work.

This is not to suggest that “The reMission” is in any way derivative, rather that the playing of this aptly named trio is on the very rarefied level of those masters. So uncanny is their rapport that it’s hard to believe that Milne had never worked with Penn before and that this is, incredibly, the pianist’s first go round with the trio format.

I’ve saved the first for last because in many ways it’s the most touching thing on the CD. It’s McCoy Tyner’s “Passion Dance,” one of only two covers on the date. It doesn’t really fit with the rest of the program, but the death of the composer, weeks before “The reMission’s” release adds an extra layer of poignancy to an already emotional 52 minutes of music.

Though there’s no narrative on “The reMission,” just a series of impressions, the story nonetheless has a happy ending. After his recovery, Milne was offered a professorship at the University of Michigan, which he accepted. That puts him a couple hours drive from Cleveland, and I was selfishly looking forward to the Midwestern tour next month in support of this release. It doesn’t look like that’s going to happen, so I’ll have to content myself with the exquisite pleasure of playing “The reMission” again and again.