If you’re reading this page, it’s fair to assume that for you, creative music is life. It certainly is for me, yet sometimes life intervenes. That happened last week when a veterinary emergency demanded what little energy I had after a mad dash to the April 15 tax finish line. I was whupped, and not even the crash-cart energy of a New Ghosts double bill of Dave Rempis’ Ballister band and the trio of Ken Vandermark, Nate Wooley and Paul Lytton could rouse me to leave the house.

Fortunately, my colleague and fellow western Pennsylvanian Mike Shanley is made of sterner stuff. Not only did he make the drive from Pittsburgh, he blogged about it on his shanleyonmusic site. Mike and I have similar tastes, and if you like what you read here, his blog is well worth a follow (bless you, Mike, for enabling RSS). 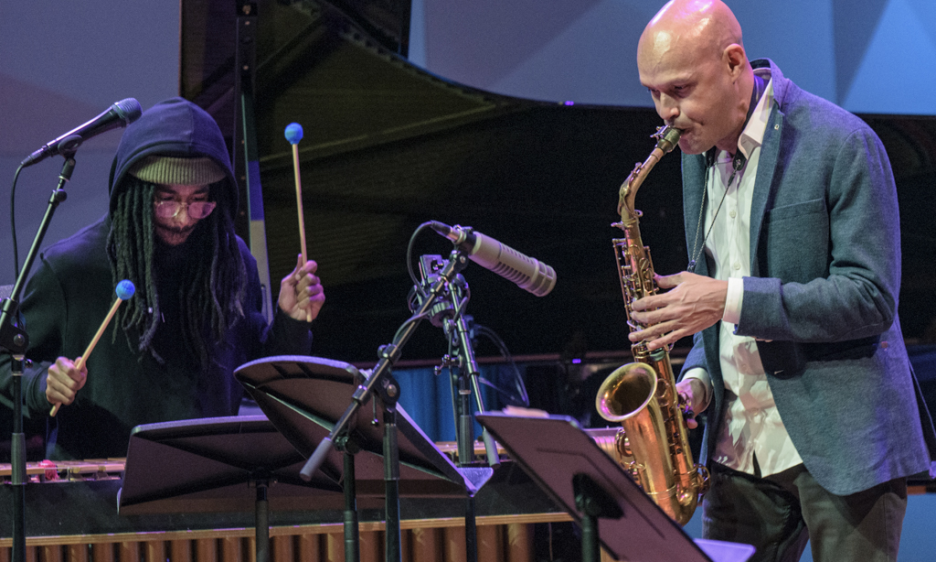 Social distancing wasn’t a thing in 19th century Vienna when Beethoven wrote “An die ferne Geliebte,” but one suspects that the COVID-19 epidemic may spawn a new cycle of laments for distant or inaccessible lovers. Baritone Mario Diaz-Moresco and pianist Spencer Myer opened Monday night’s Rocky River Chamber Music Society recital at West Shore Unitarian Universalist Church with Beethoven’s 1816 song cycle and emphasized the songs dignified longing and emotional attenuation over lovelorn anguish. This was a poised and lyrical reading that was lovestruck but never moonstruck. The dedication that is the final song, “Nimm sie hin denn, diese Lieder” (Take, then, these songs/That I to you, beloved, sang) arrived as a benediction, not a plea. Beethoven, it seems, was far too proud to beg.

By way of transition (and giving Diaz-Moresco a break), Myer offered two rounds of Beethovenian trou normand in the form of the Andante favori in F and the C Major Rondo, Op. 51, No. 1, the latter of which was played with winning innocence and charm. Debussy offered that, too, in the final song of his three Villon Ballades, which cast a very modern side-eye to the conversational style of Parisian women. Diaz-Moresco was teasing and charming in this coquettish piece, even placing his hand on his hip in a manner familiar from countless Instagram selfies.

It was a nice introduction to the all-American program after intermission which opened with Barber’s late Three Songs. Like the Debussy triptych, that set opened in a somber vein with “Now I Have Fed and Eaten Up the Rose,” set in the liminal zone between life and death, while the skipping nonsense of “A Green Lowland of Pianos” brought out Diaz-Moresco’s natural comic gifts.

Myer’s programming of Barber’s Op. 20 “Excursions” was clearly a labor of love. Why aren’t these charming miniatures–a Gershwinian slow blues, a bustling, insouciant cityscape allegro and a closing hoedown that would make a great what-is-that? encore piece–better known?

Still, all this seriousness and fun was only a warmup for the most delightful and animated portion of the program: fours of William Bolcom’s delicious Cabaret Songs. Diaz-Moresco ate these up, milking the laugh-out-loud drollery of “Fur (Murray the Furrier)” and the Edward Gorey-esque dark comedy of “Song of Black Max” for all they were worth–which is quite a lot. The woozy, last-call mordancy of “Oh Close the Curtain” (a party song one drink beyond Porter’s “Well Did You Evah”) and “George,” a jaunty, show-stopping tale of gender fluidity and justified homicide, were delivered with the verve of Bobby Short. In Bolcom’s hands, social distancing can keep you safe, but why miss out on the fun?

Erie-area jazz [and concert music] jams that made an impression in 2014 Erie Times-News ShowCase, 25 December, 2014