Born In A Log Cabin: AlbaTrio Celebrates the Release Of Their Debut CD

If you pick up a copy of AlbaTrio‘s eponymously titled new recording at Sunday’s release party at Bop Stop—and you should—you’ll hear an impressive showcase for trumpeter Tommy Lehman, bassist Tim Lekan and percussionist Anthony Taddeo. But listen closely and you might sense the presence of an uncredited fourth voice: the spacious yet intimate ambience of Strong Cabin in Lake Metroparks near Madison, Ohio. 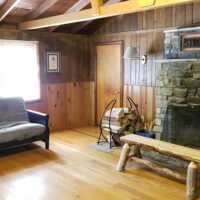 That was the venue chosen by recording engineer David Kennedy, a perfect complement to the warm, textured music of the trio and impressive evidence of the magic that can happen when musicians and engineers listen to each other with respect and equanimity.

“We went out there on the first day and we were, like, ‘Holy cow, this is beautiful,” Kennedy said by phone. “I knew that they were in the right space to do what they wanted to do with everybody focused and together and in good spirits. We were out there for two days, and we got the whole record done.”

Kennedy’s close miking puts you inside the music. Every rustle of brushes on cymbals, skin on bass strings and sighing breath from the bell of the flugelhorn is captured in intimate details. It’s almost as though AlbaTrio and Kennedy chose to turn the ECM Records acoustic of distant, wintry perfection on its head.

That’s not the only inversion AlbaTrio has in store, especially if you’re expecting a brassy, extrovert trumpet display from Lehman. “Trumpet players can’t overplay, because if you’re going to play an hour set of trumpet trio, you can’t afford to just blow, blow, blow, blow,” Taddeo said, acknowledging the physical demands of playing the instrument. “So there has to be room and give-and-take.”

The Brunswick native fell in love with the trumpet trio when he formed one with bassist Joel Negus and trumpeter Conrad Jones when they were all students at Tri-C. Taddeo would later move to New York where he played mostly with singer/songwriters, and for a while to Italy where he feasted on Italian folk music.

Returning to northeast Ohio, master’s degree from Youngstown State in hand, Taddeo wanted to revisit the trumpet trio setting he enjoyed from his student days. Lehman and Lekan were obvious choices.

“Tommy I always knew is just such a badass trumpet player,” Taddeo said. “He’s another great example of a young, amazing player that has stuck around because he sees the potential in this scene.”

Lekan, Taddeo said, “is such a breath of fresh air on the scene, because he brings something that no one else brings. I just love it when someone can be extremely intellectual in one moment, and then just give me a simple groove and make it happen. He’s so good at that.” 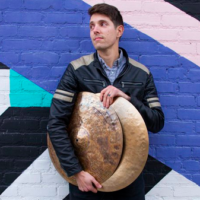 Taddeo can groove, too, as he does on the old Buddy Miles tune “Them Changes” that is the record’s penultimate cut. It’s an R&B banger that another trio, Jimi Hendrix’s Band of Gypsys, immortalized 52 years ago and something of an outlier from the intimate, often songful music that precedes it. Yet even here, Taddeo’s touch is light and his beat airborne. That’s by design.

“At some point in my career, I realized texture is really important to me. There are drummers that are going to just have chops for days, and they’re gonna wow people with that stuff,” he said. “That’s not where I fit in. Playing really melodically is something that I love and I cherish, and playing with textures.

“That’s another reason why this trio is so successful, because the ears are huge, and everyone is willing to go anywhere at any point. I love the limitedness of our instrumentation and how it actually pushes us to get textures out of our instruments that we typically don’t get.”

And thanks to Kennedy’s big ears, you can hear it all, as though you were there in late December in a log cabin by overlooking the Grand River.

AlbaTrio Album Release Concert, Sunday May 15, 7 p.m. at Bop Stop, 2920 Detroit Ave., Cleveland. In-person $15 available here. The concert will be livestreamed at Bop Stop’s Facebook page. Viewing the stream is free but donations to the band and the venue are appreciated and can be made here.