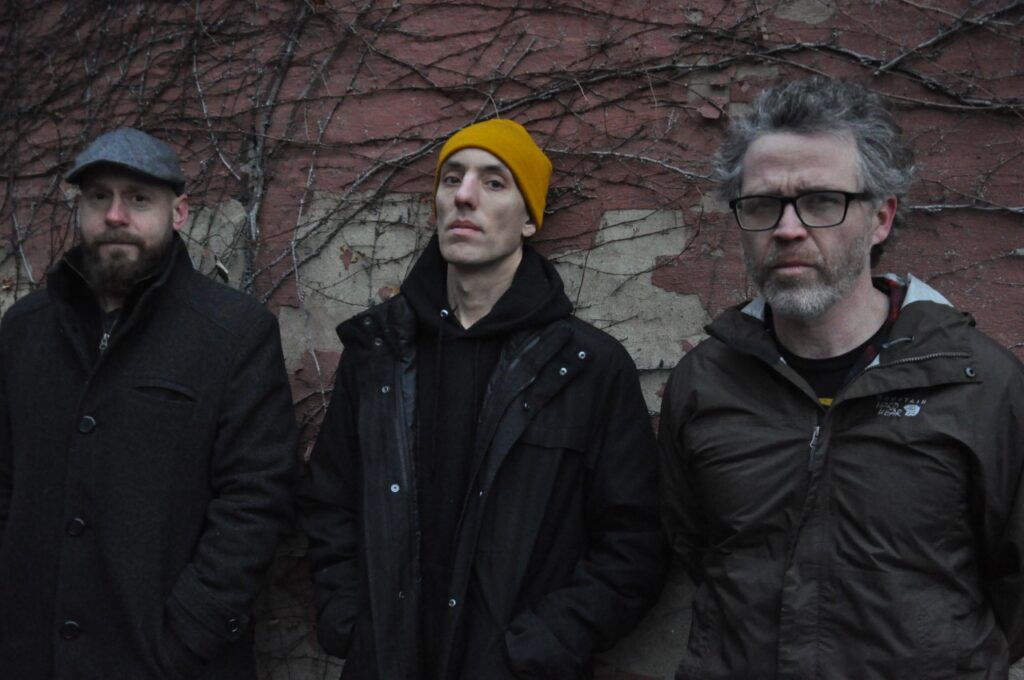 In Japan the togishi is the skilled craftsman who polishes and sharpens the nihonto, the deadly sword used by samurai warriors to cut their enemies to pieces.

In Cleveland, Togishi is a trio of saxophonist Dan Wenninger, Mike Sopko on guitar and electronics, and Joe Tomino on drums and electronics whose improvised music cuts to pieces various genres including jazz, rock, contemporary classical and noise and reassembles them in a glorious freewheeling clatter.

Togishi will bring their usual sonic maelstrom to the Bop Stop stage Tuesday, December 21, but the trio will drop down the Hingetown club’s chimney with a surprise in their sack: tunes–and not just tunes, but some of the most recognizable, widely loved and, yes, even sentimental tunes.

It’s A Togishi Seasonal Spectacular, the one concert where you can hear the band abandon their free-improv rigor and dig into the “Have Yourself a Merry Little Christmas,” Wham’s “Last Christmas,” “Dreidle, Dreidle,” “Felice Navidad” and even the inevitable “All I Want For Christmas Is You.” 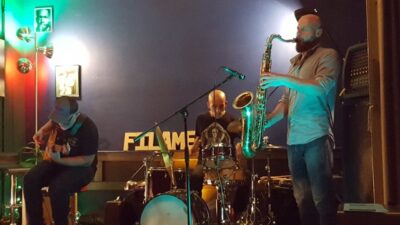 Tuesday’s concert is a successor of sorts to the annual holiday shows presented at Bop Stop by Broken Ornaments. In addition to the members of Togishi, who formed the rhythm section of that bend, the Ornaments included Stephan Haluska on harp, trumpeter Don Volenik, Rick Kodramaz on bass and Neil Chastain who subbed on drums for when Tomino was out on tour.

The concept could have been drawn up at a rehearsal of James Chance and the Contortions in the basement of CBGB’s or the old Knitting Factory: play holiday songs in the scalding, blowtorch manner of Cleveland-born free jazz icon Albert Ayler.

Broken Ornaments convened for three holiday concerts but when the pandemic hit last year, social distancing protocols couldn’t accommodate a sextet that included horns on the Bob Stop stage. Wenninger, an improvisor on the bandstand and off, proposed an alternative idea. “[Togishi] had just done a show in November, and we were like, why don’t we do this Christmas thing instead of Broken Ornaments doing it? Let’s do the small trio thing, with different versions of songs.

With the Bop Stop closed to live audiences, (Stay) Home For The Holidays: A Togishi Seasonal Spectacular made its debut on a livestream from the club last December 16 with stripped-down versions of beloved holiday melodies that you won’t hear over the speakers at your favorite coffeehouse. 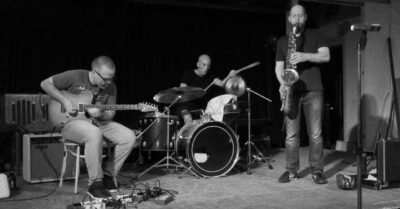 “We’ll do a really out version of ‘O Christmas Tree,’ like [John Coltrane and] Rashied Ali on ‘Interstellar Space,’ hinting at the melody and just going off on it,” Wenninger said with the excitement of a child on Christmas morning. Lacerating arrangements of “I Saw Three Ships” and Run-DMC’s “Christmas in Hollis” are also on the Spectacular’s setlist.

But even the Scroogiest of Blue Christmas cynics wouldn’t put a steady diet of gasoline-laced egg nog on the wish list, and the members of Togishi, ever the gentlemen, will oblige with an occasional palate-cleanser.

“‘Have Yourself a Merry Little Christmas we’re doing really straight,” Sopko promises. “Joe is playing little bells on it and we’re playing a chord melody that carries through the whole thing. It’s gonna be cool.”

For the record, both Sopko and Wenninger are fans of holiday music.

“I don’t get down with ‘Jingle Bells’ so much, but I like a lot of the tunes that have complex chord changes like ‘Christmas Time Is Here.'” Sopko said. “These are like standards almost. They’re just gorgeous tunes.”

Playing a single-line instrument, Wenninger is also–perhaps inevitably–drawn to the melodies. “The songs that are more like standards have good melodies, the ones that are like folk tunes have great melodies, and I do like plain-singing straight-ahead jazz versions,” he said. “I’m cool with that, but I like this [concert] because I can just totally mess with these tunes that you’ve heard a million times.”

A Togishi Seasonal Spectacular, Tuesday, December 21 at 7 p.m. at Bop Stop, 2920 Detroit Ave., Cleveland. In-person are $15, available here. The concert will also be livestreamed on Bop Stop’s Facebook page. The stream is free but donations to the band and the venue are appreciated and can be made here.