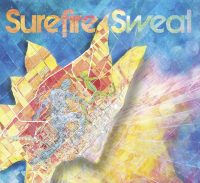 “It’s the humidity,” pianist David Torkanowsky told Larry Blumenfeld in an article in Chamber Music Magazine to explain a factor that contributes to the singular sound of New Orleans music.

Toronto, too, is a waterfront town, though less perilously so than the Crescent City, and it can get plenty humid in the summer. Keeping that summer perspiration working might have been the goal of Toronto drummer Larry Graves who assembled Surefire Sweat as his first band as a leader.

Of course, rhythm leads and every member of the eight-member band pitches in. That’s made explicit from the opening “Threshold,” which bounces along on an Afrobeat groove, and the call and response of “Number Nine.”

With its meaty, unison horn riffs anchored by baritone, this project might read as a Canadian Antibalas. That’s an intriguing proposition given how many members of the African diaspora settled in Toronto. And the best cuts on the 44-minute CD share the lift and flow of the New York band (though not the signature sound, close and, well, humid, of Brooklyn’s Daptone Studios).

Graves tries on the sly fun of John Scofield’s “Hand Jive” band on the concluding “Scoffle Strut.” Graves doesn’t quite have the knack of sustaining tension in a laconic beat as Bill Stewart did on that 1994 session. I guess, you have to move pretty briskly to break a sweat in Toronto. “Sunshine Interference,” does just that riding a New Orleans parade groove in five.

It’s fun record, in a wholesome, earnest sort of way. By the way, do Canadians sweat?